“Avatars” is our multiple award-winning short film to a movie making contest within our organisation on the theme “Digital Consumers”. Rather than make a boring mockumentary about mobile computing and social networking, I thought we should do something more ambitious. We wanted to make a decent short movie about technology that had characters, dialogues, storyline etc. Basically you know, all the works.

If you haven’t seen the movie yet, play the embedded video below or click on the vimeo link to see it in high-quality HD:

How it all started

I have been part of a handful of skits and short films. The process inevitably starts with a core idea. A skeleton plot is built on top of it and later a script fleshes out the details. The initial script goes through numerous iterations before and during the realisation. In other words, the script is a key working manuscript for the entire team. Most of the time, it’s a simple Word document with the dialogs in an free-flowing manner.

In the case of “Avatars”, I wanted the script to be more visual-oriented and less on dialogues. In other words, we wanted the script to mention scenes, locations etc. After a lot of research, I found the standard screenplay template extensively used in Hollywood. Despite being slightly cryptic to write, it proved to be quite presentable and handy while shooting.

When I got the invitation for the movie making contest, I had dropped a mail to my old movie club pals, Manu and Nithya. I shared my outline script with them and they liked my elevator pitch of “one guy waking up in the morning to find a stranger in the apartment who turns out to be his avatar”.

Once I finished the draft screenplay titled “Doppelgangers” and shared it with them, they were already visualising the movie in terms of how it would look and how the treatment of the subject should be.

Next we were hunting the actors and planning out the logistics. We had only four days in our hands and practically zero budgets. A number of factors helped us and we were very lucky to find some good acting talent and superb locations. We made a few modifications to the script and retitled it to “Avatars”, corresponding to the meaning of “online identity”. Now is perhaps a good time to delve into the concept behind “Avatars”.

The entire narrative of Avatars can be divided into three parts - The Dream, The Avatars and Catching the Taxi. This is a conventional three part narrative arc used in majority of films and even books with a - beginning, middle and end. The dream establishes the characters - Ranjan and Jo.

The dream also tries to convey their flagging relationship through several hints - the meeting at sun-set, Jo’s uncertainity by plucking the petals in a he-loves-me-he-loves-me-not fashion, her looking away when Ranjan comes etc.

There are also various hints to convey that we are in a dream. Being late is a common motif in dreams. Dreams have incoherence in location and words (hence the shaky shots and abrupt edits). They have elements of the real world just before you wake up. “Train station” was a deliberate crossover from real-life (Jo’s message was probably being played while he was asleep) to dreams. It also added a certain humour element to the script.

The symbolism of having Avatars is probably the most obvious. After considerable thought, each Avatar was given a different personality. One was geeky, another was chatty etc. This was based on the fact that each Avatar represented an identity within an online service or a social networking site. We may manifest ourselves in different ways in each of these sites, perhaps forming distinct individual personalities. After all, our Avatars will not be an exact mirror of the real you. Conversely they might collectively represent you.

All in all, the visual treatment of the script will reward you well in repeat viewings. Considering the four minute limit of a short film, a lot can be said through images. However, to the casual audience, we needed to have something jazzy. That’s where the effects come into picture.

Perhaps you came directly to this section. Wouldn’t blame you, as we intended “Avatars” to be effects-laden to highlight the use of modern and even futuristic technology. When we realised that the showing multiple avatars in the same frame, being key to the believability of the story, we realised that we needed to perfect those scenes.

Being completely new to special effects, we did what most software engineers do - Prototype! I did a test shot of being in two places in two different shots. Manu took these shots and blended them on Adobe Premiere using masking tools. The result looked much more “believable” than the Green screen effect. In fact, Green/Blue screens needed a lot more effort and correcting the interplay of light and shadow would have been a nightmare.

Given the limited time, we decided to opt for masking for these trick shots. There was considerable effort in getting the lighting correct in these shots so that the videos would blend correctly without noticeable artifacts. One three-second shot needing the three Ranjans in one frame, took seven extremely long retakes across two days. 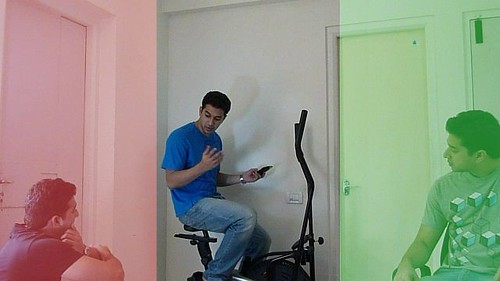 A major time-saving step was testing these trick shots immediately on the laptop at location. By this approach, we could quickly check if the shots matched correctly. This helped us avoid disappointment and saved a lot of time potentially lost in post processing corrections.

Most of effects were simplified due to careful planning before shooting. So by the time we shot the scenes with the overlay effects we knew that the camera angles had to leave some room for showing the dynamic menu selections.

Given the competition deadline, we had to finish a lot of things in the extremely short deadline. There are a lot of good resources on the web about short film making. But from our personal experience, here are some of the elements that went into “Avatars”:

What Worked What Didn’t

Now that the movie is completed, it is probably a good time to do a post-mortem of what worked and what didn’t

All in all, it was a fantastic experience doing something creative with such a brilliant team. Avatars is a work that we are all proud of. Hope you enjoyed watching it as well!

Q. Which camera did you use? A. We used a Panasonic Lumix DMC-Z3. This is an inexpensive point-and-shoot with HD video recording capabilities. We also used a tripod in some shots.

Q. What software did you use? A. We used mostly open source tools like KDEnlive, Blender 2.56 and Audacity. It was completely edited on Ubuntu 10.10.

Q. How long did you take to make the film? A. It took one day to make the screenplay, followed by 2.5 days of shooting and finally, 2 days for editing and dubbing.

Q. Where all did you shoot? A. The entire movie is shot in Mangalore. The exterior shots were taken at Bondel Road and near Infosys. The interior shots were shot in Binary Homes and at my residence.

Q. Is there a bloopers video showing all the mistakes? A. You bet there is. The bloopers and some behind the scenes stuff is here: http://www.vimeo.com/18817334

Q. What was your budget? A. We filmed on nearly zero budget. We reused as much stuff as we could. The only things we bought for the movie were props like the bouquet and the coffee cups.

Q. Where did you get the name ‘Oskon’? A. I had named the poor target of the Chinese mega-corp as OSKON without much thought. Later, I noticed that the toilet flushing system sensor at office had the letters ASKON engraved on it. So subliminal, huh?

Prev: ◀   Strongest People Are The Ones With Passion