Early adopter: An early adopter is a person who embraces new technology before most other people do. Early adopters tend to buy or try out new hardware items and programs, and new versions of existing programs, sooner than most of their peers. According to a theory called Diffusion of Innovations (DoI) formulated by Everett Rogers, early adopters make up 13.5 percent of the population – Johns Hopkins Inst.

I am not an early adopter when it comes to gadgets. But ever since Kindle was introduced, it was pretty clear to me that I am going to buy an Ebook reader. For me, moving around books has been always a problem. Moreover, I am allergetic to old print.

Three months back, close to my birthday, I ordered an Infibeam Pi ebook reader. At that point of time, for ten thousand rupees, it was considerably cheaper than Kindle in India. Also, I did not like the idea of Amazon playing “Big Brother” where your book collection was stored in the “cloud” and subject to the mercy of their deletion policies. Pi didn’t have features that I didn’t need and it had some which I felt were missing in Kindle. More on this later.

Three months later, I would make the bold assertion that Ebook readers are the future. For a voracious reader, it is a must-have and with falling prices, it will replace paper books almost completely. I would expect students to be the most evident benefactors making it unnecessary to carry heavy textbooks and allowing even remote locations to have a wider collection of books than ever before.

In case you are interested in a detailed review of Pi reader, read on… 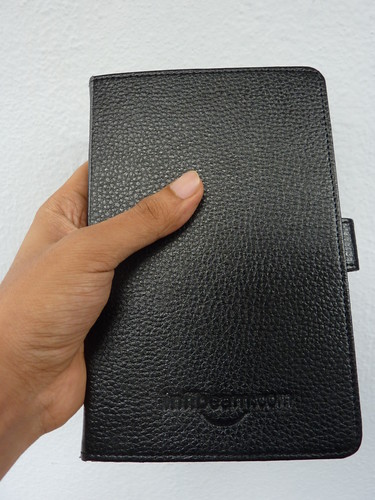 The package arrived in two weeks with several friendly calls reminding me that the package is “on its way”. When it arrived, I was happy to find that Infibeam has invested quite some time and effort to make the packaging attractive and safe for transit.

What surprised me upon opening was that the Pi logo on the screen. At first I assumed that it’s a decal or a sticker. But it seems the screen is always ‘on’ in a standby state! This shows how little power it consumes while displaying a static image/text. The only power consumption that happens is when the display changes. The display change takes around half a second of flicker. But this is not as annoying as it sounds and one quickly gets used to it, like turning the pages of a book.

In terms of appearance, the closest I can say is that Pi is like holding a piece of unwrapped white Milky Bar. Except that it is one giant booksized flat smooth chunk. It is thinner than most phones and being light quite easy to hold. There is a silver four way directional pad at the bottom right, which is similar those found in most phones. Most of the other keys are on the left leaving the bottom part mostly vacant and underutilized. 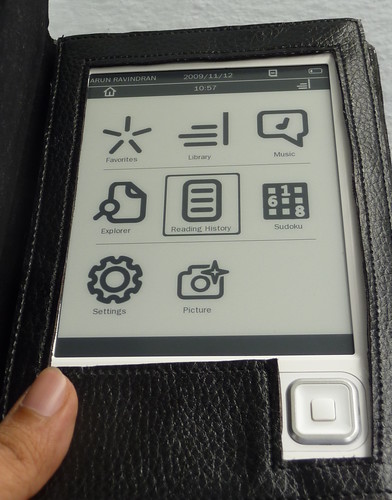 The user interface is excellent with big bold icons. You don’t need a manual to understand most of its functions. Again, this was real surprise for me for an Indian product.

In terms of features, it has a music player and a sudoku game built in. Playing music can reduce the battery life considerably. It supports the EPUB format which is an open ebook format popularly used for the iPad. It also recognises Kindle’s (.mobi) book format, PDF, RTF, HTML and even most images. The latter makes it really a great option for reading comics (with smaller page sizes) even thought it will appear in greyscale.

The most common question I hear is - How good is it for PDFs? The answer is - it depends. If the PDF is mostly text, then it can reflow the text and handle the zooming of text pretty well. If the PDF is mostly images or scanned text (without OCR), then it would not look that great when you zoom. This is a deal breaker if you are going to read a lot of technical books for e.g. programming books or mathematical works. It is perfectly fine for general reading and comics.

I have found myself reading a lot more due to the Pi reader. In fact there are many situations where Pi’s long battery life and portability came handy. Here are some such scenarios I could think of:

There has been quite a bit of discussion around ebook formats like ePub or Kindle’s mobi. If you are a normal user who would directly download books from Infibeam/Amazon, read them and forget about it, then you can skip this section. On the other hand if you are a geek, who prefers ogg over mp3 or vice versa, then you might have many questions. Like which is ebook format is the most open, whether these formats are easily interconvertable etc.

EPUB is the likely future standard than mobi. Kindles cannot open EPUBs, which has resulted in many holding back their buy decision. EPUB is the most open format; it’s basically a zip file with xhtml and images. Just unzip and read with a browser! Even Google has recently offered over a million free e-books in EPUB format.

EPUB supports features like table of contents which is very useful for longer texts. EPUB allows for “richer” formatting. You can, for example, have things like “drop caps”, pictures with text that “flows” around them, or embedded fonts, none of which Mobi supports.

Personally, I have converted most of my ebooks into EPUBs. Using a tool called Calibre it is quite easy to convert from and to ebook formats.

Of course, the Pi reader could be better, a lot better. Here is a quick list of things that I feel are its pros and cons:

Ebook readers are great devices. Infibeam Pi is an excellent device for its stated features. If the prices came down like the Kindle, there would be a lot more adoption in India.

Here are some photos of Pi reader (visit the Flickr page for higher resolution shots with captions):