Few days back, Django 1.7 release candidate 1 was announced. I have never been so excited about a release in recent memory. It has a new app loading framework and schema migrations baked right in!

It is also the significant release that I had been waiting for to update my original Django screencast. With more than 77 thousand views, it is by far the most popular Django screencast on YouTube.

Back in 2012, when I was working in Django, there were a lot of comparisons between Rails and Django. One of the biggest selling points of Ruby on Rails was their official 15-minute blog screencast. It was fascinating to watch an expert Rails developer build an entire site from scratch especially how deftly they use TextMate, which could nearly read his mind.

Armed with a Linux terminal and Emacs, I set out to create a similar screencast for anyone interested in Django. Live coding was something that I had not tried before. I remember starting at 11 pm one night, hoping to complete my recording by midnight.

But by the time I finished a recording without any major goofups it was 5 am in the morning. So with barely any editing, I directly uploaded the raw footage to YouTube and hit the bed.

Over time, a lot of people have loved the screencast, often asking how they can setup their development environment to resemble mine. Emacs despite not being an IDE is often as productive or more, depending on how well you customise it.

I have done several more Django screencasts after that, preferring to demonstrate entire projects in Django rather than focus on a specific feature. But the original still remains a favourite as it is beginner-friendly and short.

Plenty of new cool features like Class-based Views had come to Django since then. I also noted that there were very few tutorials which used Python 3. For starting a new Django project, I would definitely recommend Python 3.

Thankfully, Django 1.7 comes with great project defaults like a predefined SQLite 3 database and admin URLs setup, which gives you a running start. Migrations is a real time-saver as you don’t have to keep re-entering your test data.

The entire recording clocked slightly above 15 mins. Here is the final video and the text version below it: 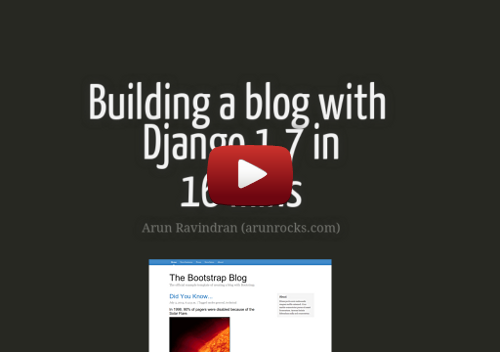 People have translated my tutorials into various languages in the past. So I have added subtitles to this screencast. Enjoy the automatic translations in your preferred language!

Some prefer to read the transcript of the screencast. Assuming you already have Django 1.7 installed in Python 3.4, you can follow these steps.

Despite this being a Python 3.x tutorial, many have tried this in Python 2.x. Which is great, but the snazzy Markdown Editor in admin seems to be missing for them.

When I had checked, I found that the Markdown widget's media i.e. javascript and stylesheets were not getting added in admin. A workaround is to explicitly define form_overrides as follows.

The entire source is available on Github. If you face any issues, make sure that you are running the same Python/Django versions and compare your code with mine.

As always, I would love to hear your comments and feedback.