It was a breezy, luminescent and quiet evening in planet Terra. Perhaps too quiet for an eventful day such as this. Perhaps that’s why emperor Kilter ordered a Pan-D911. Soon random bright spots popped all over the planet like an attack of pimples. Soon it smeared itself onto millions of other bright dots turning into something like an attack of rash.

Like a huge tidal wave the dots arose and swiftly spiralled upward into the cloudy magenta skies. With militaristic precision, the dots arranged themselves into concentric rings in space. From Terra, it was a magnificent spectacle. However, it didn’t impress the Queen, Triara. Made of sixty billion nanobots, Triara was by far the most exquisitely complex being in their planet. That meant she was female and extremely attractive, not to mention that she was undoubtedly their Queen. Even though Kilter was called the mighty Emperor and launched vain crusades that displayed his prowess, it was obvious that it was the Queen upon whom the future course of events rested upon. She scoffed at this ostentatious waste of Nino. Nino, being the hydrocarbon fuel, which powered everything on Terra including the nanobots themselves.

In less than a minute, the gigantic aerial structure resembling a football stadium composed of million of individual nanobots was completed. They slowed to a standstill and waited for the grand entry of Kilter. However when Kilter morphed from a giant ball of light to a octopedal being, it wasn’t as dramatic as he would have hoped. That was because most of the nanobots were thinking that the ball of light was simply a huge floodlight for illumination purposes. After an embarrassing pause, the swarm of nanobots erupted into a cheery mechanical drone.

Kilter expressed signs of pleasure and allowed the cheer to take its own sweet time to die down. He loved public appearances. He initiated a multi-channel broadcast with the bots. “Bots, we have assembled here for a historic moment. For the first time in twenty hundred thousand years, we are about the witness the execution of an alien trespasser”. He paused for effect. “As the most intelligent sentient beings in this galaxy, it our foremost duty to protect our planet and our civilisation. From our bitter experiences with other violent life forms we have realised that it only by containing the knowledge of our existence, that we can achieve this.”

“Hence, I am sure you would understand why I ordered the immediate execution of this alien terrorist whom we found under suspicious circumstances. Behold we show you, the vile subject in question”. A beam of light shone into a spherical crystalline sphere. Atop this brightly illuminated sphere was a blue-green algae of microscopic proportions. Triara grew concerned as she observed that it was not half as animated when she had last seen it.

The crowd was becoming increasingly fascinated with this exotic brightly-coloured being. Rumours say that this algae was actually first spotted by the Queen in her last inter-galactic vacation. She found it’s pulsating locomotion so mesmerisingly attractive that she had to have it as her very own pet. Rumours also said that after her vacation, the Queen spent an unhealthy amount of time with her pet that it almost became an obsession of her’s. This annoyed Kilter to no end. His Queen seemed to be excitedly raving about its “simple yet radiant green design”, “organic fluidity” and “long filamental extremities” all day. However, what pushed him over the edge was her secretive plan to build a reproduction chamber to “conserve” her pet. Kilter declared the “pest” as a threat to his, most conveniently, civilisation leading to the current state of affairs.

As Kilter continued his long meandering monologue, back in Terra, the Queen was slowly withdrawing herself into a coccon-like crystalline structure. It was hard to imagine what she was thinking, but it might have been something along the lines of - “this farce has been going on for far too long. Maybe a little competition would do a lot of good”. Slowly the exquisite form seemed to seamlessly blend-in with the hard brownish red rocks of Terra.

“And I hereby declare the alien to be vapourised with a single beam of focused rays until every part of its material being has been vapourised.”, concluded Kilter rather emphatically. Suddenly a bright red laser beam hit the tip of the crystal ball. The swarm broke into a noisy drone as the microscopic algae vaporised almost instantly. In its place, a white puff of vapour slowly rose up.

What happened next few microseconds is a sequence of events, like most major celestial events, that cannot briefly explained nor fully understood. It appears that the Hydrogen clouds that covered most of Terra could become incredibly unstable even with trace amounts of water. In fact, even a drop of water could seed a chain reaction that could transform its entire atmosphere. The algae vaporised by the whim of the Emperor had just the right amount of water to unintentionally change history.

It had been raining quite heavily in Terra for the last several days. The reddish brown rocks looked damp and muddy. Millions of nanobots were scattered lifeless all over the planet. They however didn’t have their characteristic steel-blue colour. Instead, they seemed to be covered in a bluish green fur. 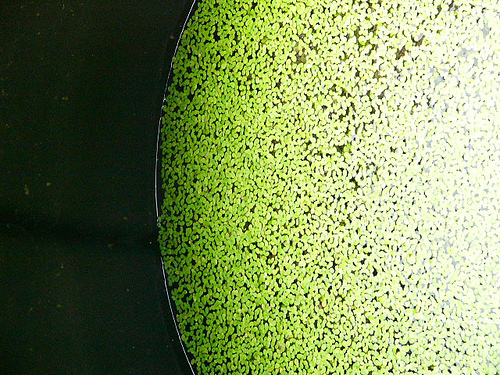 Footnote: Written on the occasion of ‘World Water Day’ (Mar 22). Rather it was an experiment to find out how far one can take the topic of ‘Last Drop’ ;)

Next: ▶   Buying Kesar in Kashmir