This year’s birthday was yet again celebrated in the best place I could possibly think to celebrate - Mangalore. Once again they have written a truly wonderful writeup about me. Check it out…

Hmmm..so, the dude in the pic is celebrating his birthday.does he need a formal introduction from us or what??!!! If ever there was one guy about whom it was hard to find a description in just one word, then it is Arun Ravindran.call him a gadget freak, regular blogger, an ardent music lover, photographer, pencil drawing enthusiast, flash programmer..and he will answer to all of your calls!! Because, he is no ordinary person, for him being extraordinary is just another day!!

He was one of the active participants in this year’s Ittesbin Skit from ES. Didn’t get to see him onstage? That’s because he was busy back stage giving voice. And don’t think that his voice talent was limited to just one character; more than one role in the ES skit was backed up by his voice!!

Don’t just think that he is good at the extracurricular stuff; he is one of the back bones of his project team. He had joined Infosys in May 2004 as an A.CON in ES (EAI). After working for the UBS and BP at onsite, he came to GAPEAIR2 project and to Mangalore.

He is one witty person who always likes to see the smile on other people’s face. He is also an avid reader and he constantly updates his blog. Maybe because he is also interested in drawing, all his “sweets at my deskFCFS” mails are associated with maps showing the easiest route to his cubicle!!!

Word has leaked out to the smilES team that he has to keep at least two parties in the food court (excluding all the other parties outside) so as to make all his friends happy, such is his popularity in this Minfy!!

Lets all wish this talented dude a very happy birthday!!

Check out these snaps too 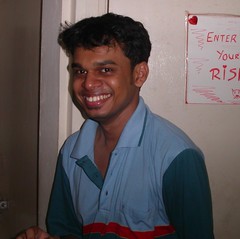 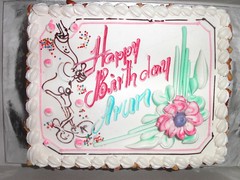 Of course you can enjoy them directly at Flickr

* - The title is inspired from the expansion of Infy rock group - YANTRA which stands for the awesome expansion “Yet another night to rock away”.

Prev: ◀   About Laurels and Golden Sandals