I use a fairly powerful laptop at home. It’s not exactly a gaming laptop but it has a pretty powerful gaming card (ATI X1600) and uses dual core (Duo T2300E) processor. In short its a great machine to play classic Sega/Nintendo games of yesteryears' through emulators. Increasingly I have been concerned about the life of my laptop keyboard which I have found, unlike the desktop keyboards, could be quite easily jammed (especially if your 10 year old cousin is banging on Enter key yelling ‘MAAARREYO’).

Somehow I had this intuition that a gamepad-like input device can solve this problem. After a couple of minutes of googling I found that my guess was correct. I could find that it is easily available in cities like Mumbai/Bangalore and it is quite cheap too. But I was not sure if I can get in in Mangalore so I searched the usual places and a few unusual places like gadget.in. I had the following criteria for my gamepad (or joypad or game controller as it is called in some places):

Finally, I could get a decent gamepad with vibrations and dual joysticks from Mangalore (Saibeen Complex, Lalbagh) itself for Rs. 350. It is a Chinese model called PU850 and is autodetected by XP when plugged into the USB port (though it comes with a mini CD with drivers). It has all the features I wanted. As regards to looks, decide for yourself ;) 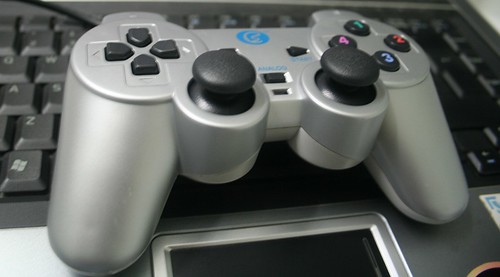 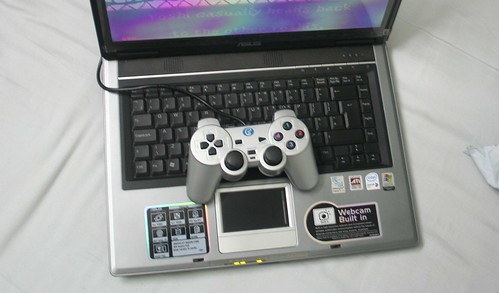 Don’t they go well with each other :D? I have played only a few games with it so this is a quick review but here is what I found:

All in all, it has been a good value for money. I can now literally sit back and play my game collection with much better controls and stop worrying about my Pandora.